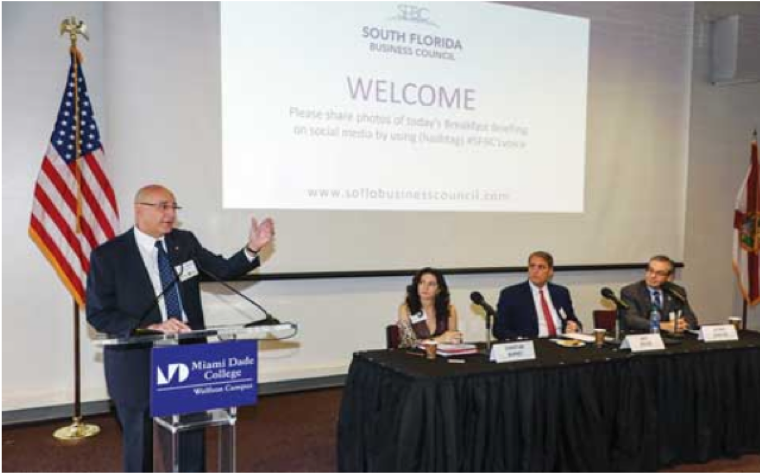 The young South Florida Business Council held an introductory forum for a group of Miami-Dade leaders last week and quickly proved the need for its existence.

The organization, hammered together in February by three major chambers of commerce in Miami-Dade, Broward and Palm Beach counties with the aim of becoming the first significant tri-county voice for business, is targeting five major issue groups, with mobility and transportation the most advanced in the group’s efforts.

After forums in Broward and Palm Beach, business council members and invited guests met at the Wolfson Campus of Miami Dade College and were welcomed by interim President Rolando Montoya.

“If you drove here, I think you made a mistake,” President Montoya told them. A combined trip by the Brightline rail service and Metrorail is the best way to get to the campus, he said as latecomers straggled in complaining of highway snarls. “This campus is way ahead in terms of the seven campuses that we have in the availability of the Metromover and Metrorail.”

“Mobility and transportation is important for this college,” President Montoya noted, because if potential students, who often come from poorer economic backgrounds, can’t get to classes they lose out on education and “you don’t achieve social mobility.”

The new tri-county organization was born after a studied merger of the Greater Miami Chamber of Commerce and the Fort Lauderdale chamber fell apart several years ago, said Alfred Sanchez, Greater Miami Chamber CEO and president. In the process, he said, “the importance of regional presence became very apparent.”

Mr. Sanchez repeated a frequent quip on South Florida separatism by Miami-Dade Mayor Carlos Giménez that the only physical demarcations on earth visible from outer space are the Great Wall of China and the Dade-Broward county line. But, he said, those regional demarcations are blurring, and the South Florida Business Council is one result.

There is a reason, Mr. Sanchez and other speakers noted, and it often comes down to funding packages from the state legislature: “Other areas throughout Florida have figured out how to work regionally and quite frankly are eating our lunch,” he said.

“The tri-county area deserves more attention” in the legislature, said Christine Barney, the business council’s first chair and the CEO of rbb communications. Legislators in Tallahassee say South Florida groups come to them without a unified voice. The aim of the council, she said, is to find areas of unity where the region’s aims come together.

Mr. Sanchez noted of the South Florida region that “together we are about the 12th largest economy in the country.” But speakers made it clear that often the region doesn’t reap funding to match its stature.

“We’re really looking at how do we work together,” Mr. Sanchez said. “We want to walk before we run. We’re looking for those low-hanging fruits of mutual cooperation.”

The group in recent months picked five focus areas that seemed important to all three counties, not only for the business climate but for quality of life. They are mobility and transportation, education quality, water management, affordable housing, and tourism growth.

“This is probably the most unselfish, or selfless, approach a business community can take,” said, Jack Seiler, a former mayor of Fort Lauderdale and the chair-elect of the organization. He noted that it was far from a traditional business-oriented list of aims and was focused instead on local needs.

As those aims of the business council are firmed up, Miami-Dade Commissioner Daniella Levine Cava, the only elected official present, urged council members to speak later this month as the county commission discusses its aims in lobbying the state and federal governments for help for the year ahead.

While all five of the business council’s target areas were discussed during the meeting, it was transportation that seemed to be the hottest issue.

Javier Betancourt, executive director of the Citizens’ Independent Transportation Trust, noted that a recent county commission vote to spend more than $76 million in sales tax transportation funds that the trust oversees to build a railway station in Aventura for the private Brightline – soon to be Virgin Trains – is leaving the tri-county system Tri-Rail out of the equation. Premium-priced Brightline, he pointed out, is not commuter rail.

“We really want to see Tri-Rail provide commuter rail that is accessible for the public” in addition to the intercity rail service of Brightline. Planned Tri-Rail expansion into downtown Miami and along the northeastern edge of the county, he said, “is on life support, frankly.”

He asked that the business council move quickly to push the operators of Brightline to make the downtown and eastern expansion of Tri-Rail happen. A push from the business community, he said, is vital in that effort.

“That eastern line is an important line, we agree,” Mr. Seiler said. “In Broward, everything is based along that eastern line” and Tri-Rail doesn’t now run there. “Transportation doesn’t stop at any of our lines.”

Read the article on MiamiToday