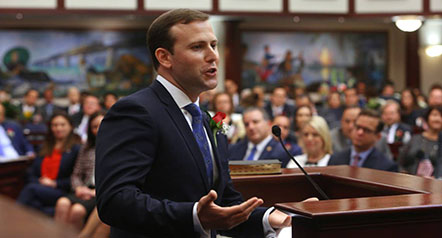 Florida’s incoming House speaker warned members of the South Florida Business Council this week that in order to weather the "massive financial hit" the state sustained from the pandemic, there will need to be "significant cuts to the budget."

Rep. Chris Sprowls, a Palm Harbor Republican who is in line to become the speaker of the Florida House of Representatives for two years in November, hinted that the budget austerity needed to recover from the coronavirus-induced recession would take "three to four years to get back to where we are," but he was optimistic Florida would be in better shape than other states.

"We’ve had an obviously massive financial hit to the state, not unlike the businesses we’ve seen interrupted or closed during this period of time in COVID, which is going to create a significant challenge for us,’’ Sprowls told the virtual webinar of about 250 members of the council, which includes members of the chambers of commerce in Miami-Dade, Broward and Palm Beach counties.

"The only way to kind of weather that storm and get the state back on its feet is going to mean significant cuts to the budget,’’ he said." There’s going to be businesses and restaurants that unfortunately never open their doors again here in Florida, and that’s going to take a toll on the economy."

A survey of the group’s members before the event found that 64% said that COVID-19 is the top issue facing Florida.

But, in keeping with Florida’s Republican governor and incoming Senate president, all of whom are Trump supporters devoted to helping the incumbent president win re-election, Sprowls refrained from discussing some of the darker details related to the COVID-induced troubles in the state’s budget.

For example, Florida economists say the state faces faces a $5.4 billion budget deficit over the next two years that will necessitate the budget cuts. The governor has suspended COVID-related evictions and mortgage foreclosures five times, the latest expiring on Oct. 1 and the decision has left a housing industry in limbo with no promise for what could happen to the hundreds of thousands of families who don’t have the money to pay their owed back rent.

LEGISLATORS ON THE SIDELINE

As the coronanvirus barreled into Florida, shuttering businesses in the peak of the summer tourist season and infecting nearly 700,000 residents, Sprowls and other Republican legislative leaders have left the spotlight to Gov. Ron DeSantis.

This month, Sprowls and incoming Senate President Wilton Simpson penned an op-ed addressing another issue not often touched by Republicans: a call for better floodplain management in the face of sea level rise.

Democrats have tried and failed to call for a special session to address the state’s broken unemployment compensation system. And Sen. Jason Pizzo, a Miami Democrat, has warned that "a perfect storm is brewing in Florida, as massive job losses, fluctuating extremes of coronavirus cases and the state’s broken unemployment insurance system collide."

On Thursday, Sprowls was cautious, and optimistic.

"Because we’re coming into this so strong, because of our low regulations for businesses, we are going to be able to get on our feet even quicker,’’ he predicted.

"We know it is merely a matter of time before rent and mortgage forbearance is over. Renters, landlords and homeowners face evictions and foreclosures in the near future without further assistance from federal, state and local government,’’ said Joe Chase, chairperson-elect of the council.

He said the organization wants the state to immediately distribute the $220.5 million in the Sadowski Trust Funds "to counties to address COVID-related housing concerns such as rent and mortgage assistance."

Asked by business members whether the Sadowski Affordable Housing Trust Funds will be able to keep the money earmarked for affordable housing projects, or whether it will be swept into general revenue to be spent on other projects, Sprowls answered: "It’s a challenge."

Sprowls suggested it is an issue that should be addressed by local government. "We elect our leaders to prioritize what is most important for the state at a particular time, and then be accountable for the selection of those priorities,’’ he said.

Asked about the prospect of funding for commuter rail to relieve congestion on South Florida’s highways, he said: "I’m not a fan." But he supports privately funded bus rapid transit and electric vehicles.

What impact will COVID-19 have on Florida’s higher education? "I am telling everybody, you know, expect cuts,’’ he said. "Higher ed will be no exception to that."

He was asked if there is anything more the Legislature could do to hold nursing homes with "long histories of deficiencies in dealing with infectious disease" accountable, including those given contracts by the state.

"I’m not sure what they mean by holding them responsible,’’ Sprowls answered. He said he was impressed with the Department of Health long-term care strike teams and the focus on keeping elders safe.

"I think by and large, they did a really, really good job,’’ he said.

And asked how soon Florida can expect its tourism economy to come back, he said he was optimistic and added, VISIT Florida, the state-run marketing arm, "will play a significant role in making sure that people realize that Florida is open for business."

ON THE STUMP FOR TRUMP

Sprowls has been a Trump surrogate on the campaign trail, appearing with the president at an event in Tampa and scheduled to be the keynote speaker at the Oct. 1 Trump Day Dinner in The Villages.

He told the Herald/Times on Friday that it is too soon to know how deep the state’s unemployment fund deficit will be and whether there will be any more federal funds coming to provide benefits to the state’s jobless after the funding runs out this week.

"The No. 1 priority is getting back to work,’’ he said. "When we get people back to work it solves a lot of problems." He said, adding: DeSantis is "working with the administration" on the issue.

He told business leaders that Florida should be rewarded by the Trump administration for being good stewards of the state budget and economy before the COVID crisis, and allowed the flexibility it needs to spend the CARES Act funding.

"We’ve spent down a lot of our reserves, which were very healthy prior to the pandemic,’’ he said. "We did get the CARES money, which is currently sitting in the state treasury. It’s a little unclear at this point as to whether or not we’re going to receive the flexibility from the federal government that we’d like to see, in order for us to be a little bit more nimble."

He said that "based on how we’ve performed financially before the pandemic," the federal government should allow the state to spend the money as it needs, instead of being restricted by federal rules. But, he added, it will be only a short-term fix.

"Even with getting great flexibility with the CARES money, the impact on the budget is going to be severe," he said.

Mary Ellen Klas can be reached at meklas@miamiherald.com and @MaryEllenKlas

Read the article on The Miami Herald